Fabulous Flournoy is a player and head coach for Newcastle Eagles. He is absolutely an amazing player who started his basketball career in 1996 after finishing college. He first played for Birmingham Bullets and had an enormous contribution to the playoff victory of the team, beating London Towers in the final. He played a total of 498 games and has a total of 2910 rebounds, 1646 assists, and 764 steals. He started playing for Newcastle Eagles in 2001 and had contributed to its success in any way he could, ever since. 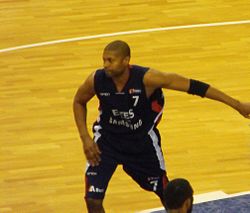 Coming from a family with basketball background, the 41 year old BBL player is the only player who played a longer time for Newcastle Eagles than Fab Flournoy. Since he joined the Eagles for the first time in 2000/01 season, he is one of the best scorers in the BBL history and he earned an MVP (Most Valuable Player Award) in the 2014/15 season.

Zaire Taylor is one of the best players of the BBL. He earned the 2013-14 Molten BBL Player of the Year when he played for Worcester Wolves. He has strong scoring skills that he uses this season in action for London Lions. He definitely brings his talent and his great efforts to raise the team’s performance and win some trophies for it.